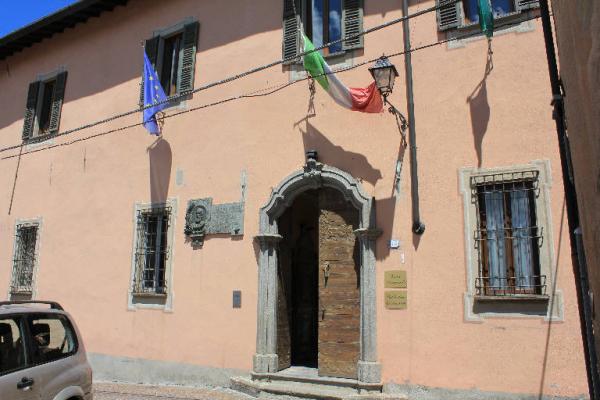 Manzoni’s Palace is an interesting historic building of Barzio , a lively tourist destination in Valsassina , and it hosts the Municipality and the library.

The historic palace belongs to the late seventeenth-century and has been declared national monument in 1930 ; besides, it is named Manzoni’s Palace thanks to one of its owners : Pasino Manzoni , of the branch of Manzoni’s Family , to which belongs also Alessandro Manzoni.

From the wooden front door, that is bordered by an amazing eighteenth-century portal in stone , you reach the main courtyard where you can find a family crest , a well with eardrum in classic style and a cruis porch on pillars.

The Civic Room is particularly interesting ; it is situated to the left to the entrance, where you can admire the frescoes in Baroque style and the crest engraved in the marble.

On the external façade there is an headstone with bronzy medallion dedicated to Tranquillo Baruffaldi , a nobile man from Barzio , voluntary among the thousand of Garibaldi and descendant of Baruffali’s family , that became the building’s owner in 1800.