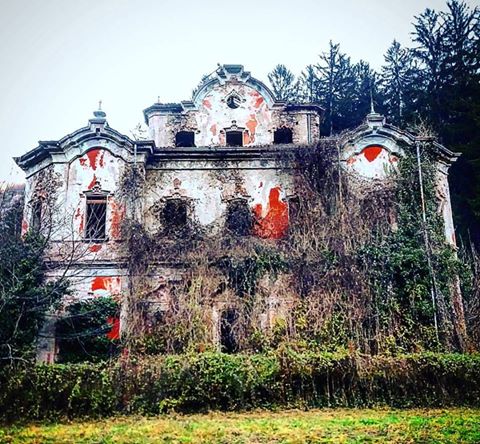 Villa de Vecchi is an historic residence of 19th century , located in Cortenova , in Valsassina.

It is well visible from the provincial road across the valley , Villa De Vecchi is sunked in the green and surrounded by what one time was a large and well-kept park.

Villa De Vecchi , nicknamed Red House because of its original colour , still today in part visible , was wanted by one of the protagonists of the Italian Risorgimento.

The beautiful Villa had richly decorated interiors and luxurious and original furnishing ; the Count had a great passion for the East and he decorated the Villa with objects from over the world. The residence was built between 1854 and 1858 by the architect Alessandro Sidoli.

Later , in 1938 was abandoned by the heir of  De Vecchi’s family , and in 1959 was finally purchased by the Medici of Marignano. In the early 1980s , the residence was discovered  by some local entrepreneurs.

Meanwhile , the Villa has been looted by most of the furnishing and it was a victim of acts of vandalism. Precisely this state of neglect has created around Villa De Vecchi the air of mystery that has made it famous for the legends of ghosts and supernatural appearances.

Today the building is in a state of neglect , enclosures around the Villa has been arranged in order to protect the safety of the people , because now is precarious and condemned.

However , Villa De Vecchi , is famous , thanks to a well-known worldwide photo shoot website buzzfeed.com , as location for curious and photographer.