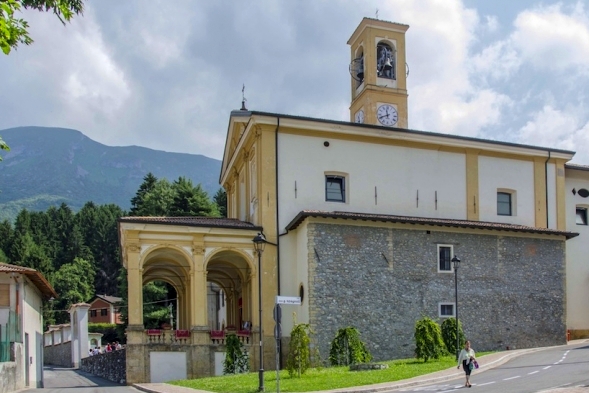 The church of St George is an ancient religious monument situated in Cremeno , in the Valsassina’s highland.

In olden times the congregation of Cremeno was really important and it extended his jurisdiction to all the southern valley, on Pasturo , Barzio , Moggio , Culmine di San Pietro and Maggio.

The cardinal Federico Borromeo , during a pastoral visit in 1614, held that the curch was going to be demolished and rebuilded newly , in accorde to the drawing that the Prefect of the Factories was going to sent from Milan. Because of the plague , the building work lasted almost a century , but the new church was really majestic. Except the bell tower , that was raised , the old church was completely disappeared.

The inside part presents a single aisle accompanied by four lateral chapels and a semicircular apse with an altar (from 1793) and nineteenth-century choir. The chapels , internally , host a lot of artworks including frescoes dedicated to the Titular Saint , biblical episodes and a work that is attributed to the school of Bergognone (1535).

Externally you can admire the chapels of the Way of the Cross erected in 1772 , as the headstone sets on the arc of access reminds.

From 1836 ,  every year on Agoust 16th the residents celebrate Saint Rocco making a solemn procession that starts from the Church of St George and continues following the main streets until the church of Saint Rocco.